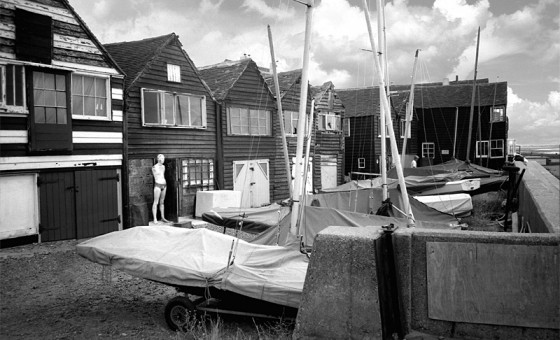 Above: Photo courtesy of and available for print www.whitstablephotoprints.com

The history of our Huts by ‘Rod Joiner’

I call the buildings Stores as opposed to Huts as this is the way that all the local people used to refer to them. They seem to be too large to be called Huts and far to grand to be called Sheds, and as they were undoubtedly used originally by fisherman to store their gear, Stores would appear to be the most appropriate name.

In 1869 a disastrous fire destroyed over eighty houses, workshops and storehouses just to the west of the Harbour. This would have covered the area where the present Huts now stand.  Although it would be difficult to establish exactly when the buildings in the effected area were replaced it probably was not too long after the fire.  This could well make the the existing Huts over 130 years old. 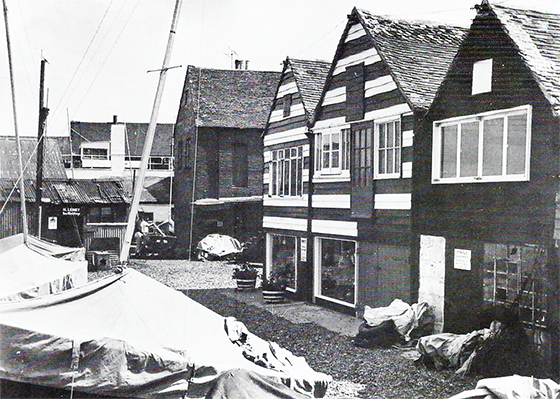 By the late nineteen forties the Huts were mainly occupied by local families with a boating interest, either angling or sailing, and only two remained as professional fisherman’s stores. These were:­

No.3 Mr. Stroud owned two ex. oyster smacks and used them for trawling for shrimps. Nets were hung up to dry on a post erected on the beach in front of his hut.  This business ceased trading in the late fifties and the Hut continued to be used by his family.

No.10 Occupied firstly by ‘Crutchy Stroud and then by ‘Ogie Laker and finally by Dave Foreman all of whom were involved in various forms of fishing.

No.11 Nichols the builders merchants in Harbour Street owned this building and used it for additional storage. The shop closed in the nineteen sixties and the Store was sold to Mr Hertford Janes an antique dealer who stored large items there, he sold the the building to the W.O.F.Co. when its condition became unusable. It used to sway alarmingly in high winds and eventually collapsed in the nineteen eighties to be completely rebuilt in 2010.

In the nineteen fifties Mrs Madge Rigden, wife of Roy Rigden the boat builder, began to sell yacht fittings etc. from a trestle table outside No.1. Hut 1 then became the original Dinghy Store, Whitstable’s first yacht chandlers, eventually expanding to incorporate No.2 as well. In the mid seventies the Dinghy Store moved to the present much larger premises along Sea Wall.

Harold Leney was the blacksmith who worked in the Forge. As young lads we used to .stand at his seemingly ever open door and watch as he heated up pieces of wrought iron and then hammered them into various shapes on the anvil. As well as making parts for the boatyards and local builders ice made items such as iron gates. Mr. Leney retired in the nineteen seventies.

The brick built Store close to the Yacht Club became known as the Anderson Shed atter it was occupied by Mr. Anderson and his family in the forties. Bob Anderson was an influential man in Whitstable as he was not only the proprietor of Anderson, Rigden 4 Petkins I td. (Whitstable’s largest boatyard) but he was also the Commodore of the Whitstable Yacht Club and a director of the W.O.F.Co. When he had no further use for the store it passed to the W, Y.C. and was used for recue boat storage. After later negotiations it passed to the W,O.F.Co. The W.Y.C. gaining the ownership of the  Stroud Store,  the wooden building which stands beside it. The majority however were only used for pleasure„providing storage on the ground floor for rowing dinghies, various boating equipment and fishing tackle etc. The upper floor would probably contain a table and some chairs and perhaps a stove for making tea. As there was no running water or sanitation overnight use was not permitted, but this did not prevent the users from spending most of the summer weekends and their holidays’ down at the beach . Such was the level of activity that in 1953 over thirty Store users gathered in the nearby Boathouse for a tea party to celebrate the Queens Coronation.

Gradually the community of  Store  users diminished as the family weekend use seemed to fall out of fashion., and as a consequence!ack of maintenance caused some of the buildings to tall into a very poor state of repair. From the nineteen eighties onwards the W.O.F.Co. gradually took over all of chess wooden buildings and began a programme of restoration and interior alteration to make them as they are today. 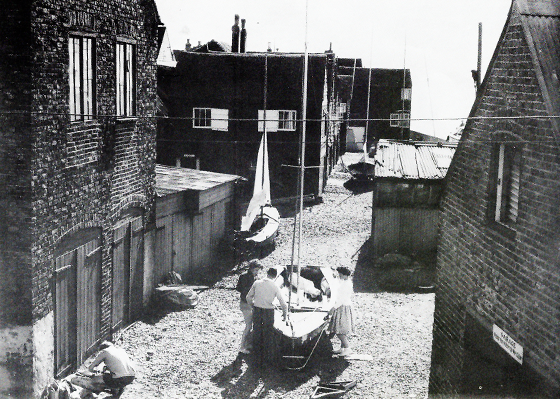 Store occupants in the late forties:

Oysters have been farmed in Whitstable for centuries, but it was not until 1793 that the industry became highly regulated with the Act of Incorporation of the ‘Company of Free Fishers and Dredgers of Whitstable’. It is from this time that the records in this collection begin. The Company of Free Fishers and Dredgers evolved from the Court of Fishing and Dredging under the direction of the Lord of the Manor and his company. This allowed the ‘eldest son of a fisherman at 16 and others at 21’ to become Freemen, thus bestowing upon them the right to farm oysters. Most of the profits went to the Freemen but a percentage was ploughed back into the company to support the widows of past Freemen.

Lord Bollingbroke, a Lord of the Manor in the 1790s, incurred so many debts that he was forced to sell the fishing rights, but eventually the Oysterman established their own company, the Company of Free Fishers and Dredgers, in 1793. The company was regulated by a group of individuals elected at the Water Court. The members included the Water Bailiff, the Foreman and a jury of 12 Freemen. The Freemen were in turn elected from the annual list of Freemen. (Examples of these lists are to be found in this collection.) The Company was run as a co-operative with an emphasis on self-help between its several constituent extended families. In the early part of the 19th century, the industry flourished. This enabled the town to increase in population and prosperity.

The Canterbury to Whitstable Railway was opened in 1830 and improved transportation of the oysters to markets across the country, including the Canterbury Fish Market and Billingsgate Market in London. Many papers in the collection detail legal struggles. Towards the end of the 19th century the Company fell on hard times which started with the importation of cheap oysters from abroad. Then oyster crops failed, due in part to over-fishing by the increasing number of Freemen, which resulted in stricter criteria on who could become a Freeman.

The Company also endured many lengthy legal battles over fishing rights and anchorage and claims due to illness from having eaten contaminated oysters. Many papers in the collection detail legal struggles. The Company also suffered at the hands of fraudsters selling inferior oysters, claiming that they were genuine Whitstable Oysters. The Company’s problems were further compounded in 1886, when the company Treasurer disappeared to America with a large proportion of the Company’s funds. Four years later the sea froze for several weeks and this was the prelude to several severely cold winters. The now debt-ridden Company was reconstituted in 1896 under the Companies Act and the Whitstable Oyster Fishery Company was found. This company was under the control of a Board of Directors and consisted of shareholders, this company still trades today selling the world famous Whitstable oysters that now have PGI status (Protected Geographical Indication).